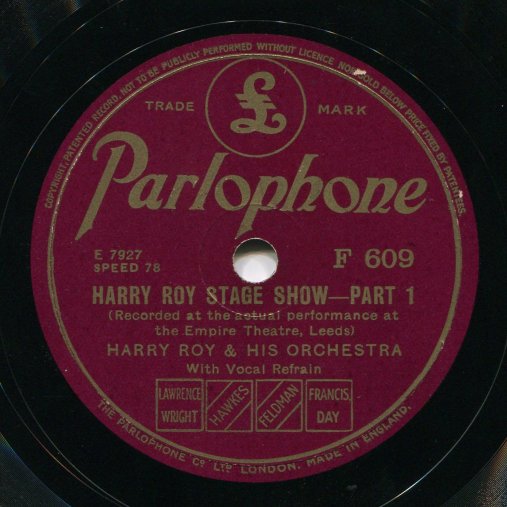 Here is a recording of the Harry Roy Orchestra performing before a live audience at the Empire Theatre in Leeds, England on October 8, 1936.  Such performances were rare on records at the time due, in part, to the extreme limitations of how much material could fit on a 78 rpm disc.  In this instance they accomplished it by editing together a montage of excerpts of the program including audience reaction as well as the audience providing the vocal for the song “Alone.”

To preserve continuity I merged both sides of the record into a single audio file.  The songs featured in part one include “Bugle Call Rag,” “Tiger Rag,” “Knock Knock Who’s There?” and “Alone.”  Part two features “Sarawaki,” “St Louis Blues,” “Piano Madness” and “Somebody Stole My Gal.”

Because the popular music from this period survives mostly through 78 rpm discs, it can be easy to forget that what we hear today on old records accounted for only a portion of the period’s music consumption.  The majority of the dance bands of the 1910s through the 1940s earned their living mostly through live performances at hotels, dance halls and theaters.  With the exception of the occasional radio transcription that has managed to survive, very little remains that provides much of an indication as to what those live performances were like beyond the songs.  For that reason, I think this is an interesting record – it provides a glimpse, albeit extremely brief, of what what it might have been like to hear one of the bands in person at a theater.