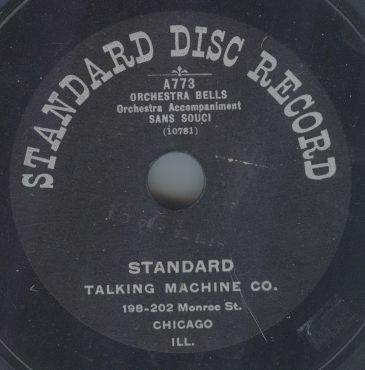 This recording comes from an old Standard Disc Record.   Standard Talking Machine Co. was one of a handful of Chicago based labels which marketed records with non-standard sized spindle holes.   The companies sold and gave away low cost phonographs with oversized spindles with the catch being that only their records would fit on the machine.  (Of course, that did not stop people from drilling out larger spindle holes into more popular records – and thus one will occasionally run across a 1900s or 1910s Victor or Columbia record with a crudely drilled larger hole.).

The records for most of these Chicago based labels were pressed by Columbia and featured content previously released on the Columbia label.  One nice thing about Standard Disc Records is that the catalog numbers on the label are identical with the original Columbia issue which makes it easy to cross reference readily available Columbia discographical information.

The only difference besides the size of the spindle hole between this record – Standard A773 – and Columbia A773 is that the Standard record gives only generic artist credit.   A quick look at the Online Discographical Project shows that Columbia A773 featured Charles Adams (Bells) “Sans Souchi” on one side and Prince’s Orchestra “Dollar Princess Selections” on the other.   (I will feature the “Dollar Princess Selections” side on a future update.)

Unfortunately, I have not been able to locate much information about “Sans Souci.”   No composer credit is listed on the Standard label but the Online Discographical Project entry for the Columbia issues lists it as  Bucalossi.   But there were two composers named Bucalossi:  Procida Bucalossi (1832 – 1918) and his son Ernest Bucalossi (1859 – 1933).  Whoever composed it, I think is very charming.

One Response to “Sans Souci”