The Benson Orchestra of Chicago – 1924 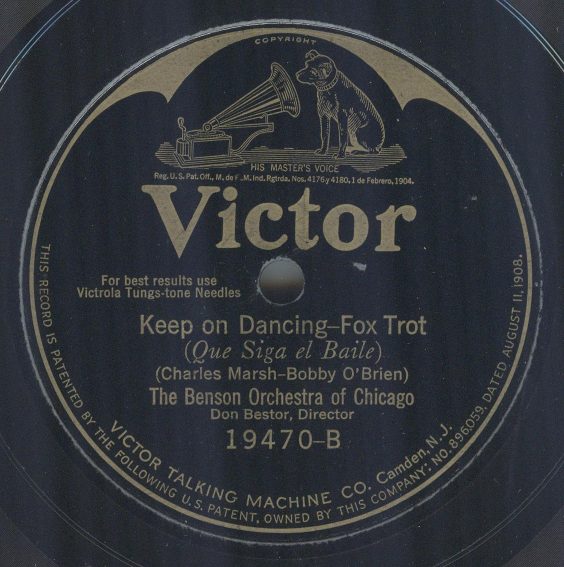 Here is a jazzy “hot dance” record I stumbled across and purchased at a used book store a couple of weekends ago.

The Benson Orchestra of Chicago was one of  several Chicago area bands operated by cellist and entrepreneur Edgar Benson.   Since this was during the era when the jazz craze was at its height and ballroom dancing was a major national pastime  it was not uncommon for successful bandleaders to have more demand for bookings than a single ensemble could fulfill.

The song “Keep On Dancing” also has a Chicago connection as it was one of the first songs published by a music publishing venture of the Duncan Sisters who were well-known vaudeville stars.   The publishing company had its offices in Chicago’s Garrick Theater Building and, as far as I can determine through online research, remained in business for only a few months.

I recently featured a different recording of “Copenhagen” by the California Ramblers in my June 4th posting.  But this version of the song by the Benson Orchestra is too good not to include.

Had this record been made less than a year later it would have been recorded through a microphone rather than an acoustical recording horn.

2 Responses to The Benson Orchestra of Chicago – 1924