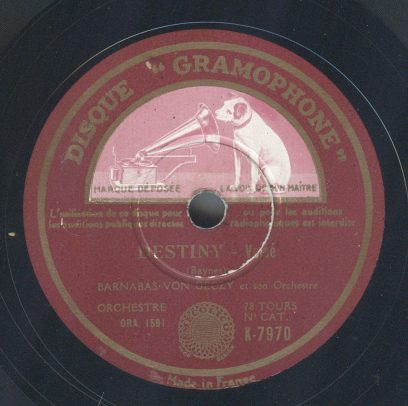 Here are two  selections by Barnabas Von Geczy’s (link via Google Translate) salon orchestra.   Von Geczy was a Hungarian violinist and bandleader whose recordings were popular throughout Europe.  From 1925 to 1937 his orchestra had a long term engagement at the Hotel Esplanade in Berlin.

My copy of the record is a French pressing.   I decided to reproduce the song titles and artist credits as they appear on the label.  The titles in their original language are in parenthesis.

“Destiny Valse”/”Destiny Waltz” was written by British composer Sydney Baynes in 1912 and was his most famous work.   The song was one of the selections performed by Wallace Hartley’s White Star Orchestra on the ill fated maiden voyage of the Titanic.

” Voix Du Printemps”/”Frühlingsstimmen” or “Voices of Spring” is a very pretty waltz composed in 1882 by Johann Strauss II.