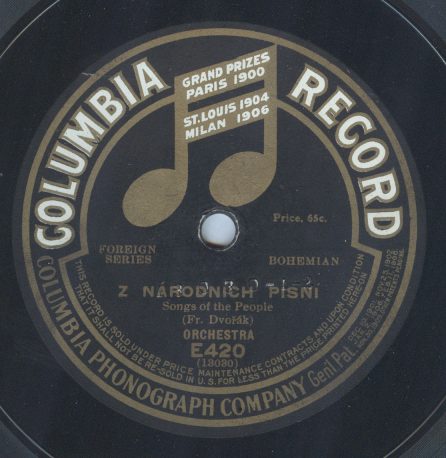 Here is a record that I have more questions about than information.    It features Bohemian music and is from Columbia’s E catalog number series which was used for foreign and ethnic recordings. Unfortunately, I do not have access to any of the discographies that cover the Columbia E series.  I can tell from the label design that my copy was pressed sometime in 1912.  But an online reference I found to a Columbia E series recording from 1912 suggests that this record was originally issued somewhat earlier. Furthermore, the matrix number is not of any series that I have information on – which suggests to me the possibility that it might have been recorded in Europe.

The composer credit on both sides is for “Fr. Dvorak.”  Was this perhaps Antonin Dvorak – or maybe a relative?  Finally, no artist credit is given for the band – which was not all that uncommon during the 1900s and early 1910s for recordings made by in-house studio musicians.

If anyone reading this has additional information, your sharing it in the comments would be much appreciated.

This entry was posted in 1910s, Acoustic Recordings, Ethnic Recordings. Bookmark the permalink.