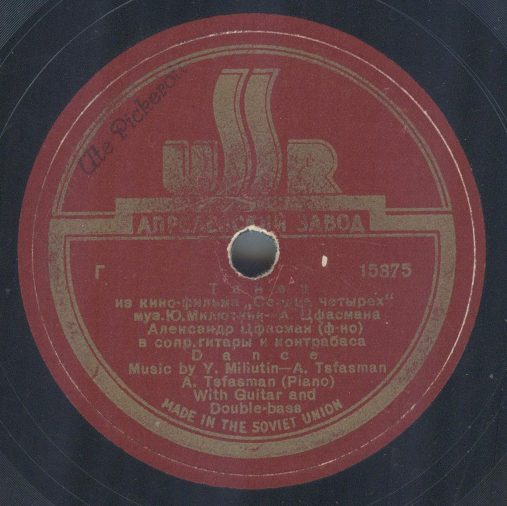 Here are two 1947 sides by pianist Alexander Tsfasman who was one of the pioneers of jazz in the Soviet Union.

If you look on the label image,  the two words just below the stylized USSR letters translate to “Aprelevka Plant.”  Aprelevka is a small town southwest of Moscow and was the location of the largest record pressing plant in the Soviet Union.   The factory dated back to 1910 when it was established by German investors.  During the early years it issued records under the Metropol label.   After the Russian Revolution the plant was confiscated by the government and, on the orders of Lenin, production was shifted to records of propaganda speeches by various members of the new government.   The factory was forced to shut down for a period during the 1920s due to a shortage of shellac, the material used to press 78 rpm records.   But by the late 1920s the facility was back in production. In the early 1950s the plant began to manufacture LPs.

Based on my understanding of poor translations of Russian websites,  prior to 1964 Soviet records were not identified by brand names as was the case in the rest of the world but rather by the name of the pressing facility.   In 1964 the Soviet Union began issuing records from the various facilities across the country under the Melodiya label.  The Aprelevka plant was Melodiya’s largest pressing plant.

After the collapse of the Soviet Union the Melodiya organization was broken up and the Aprelevka plant became an independent joint stock venture.  During this period, because of falling demand, production of vinyl LPs was discontinued though the factory continued to produce cassette tapes and expanded production into other areas such as bottled sunflower oil and packaged cereals.   All production ceased after the firm entered bankruptcy in 2002.   In recent years, a portion of the facility has been converted into a museum.

The production of 78 rpm records was always a challenge in the Soviet Union because the country had no domestic source for shellac.  Therefore,  the only way the government could obtain it was to either pay for it with scarce hard currency or by recycling old and broken records.   Thus a rather odd distribution system for records emerged.   For each record there was a small production run made for exclusive shops that were open only to foreigners and members of the Communist Party elite.   The records destined for stores that served the rest of the population had a notice on the label that stated they could only be sold on exchange for an old or a broken record.

The English translation on the particular pressing featured in this update indicates that it was intended for foreign distribution.  My assumption is that it was meant for USA consumption but it is also possible that it could have been intended for the UK or Australia.   I do know that there were a few political organizations in the USA with Soviet sympathies that imported and distributed Soviet recordings.

I have a few more Soviet records in my collection and will feature some in future updates.