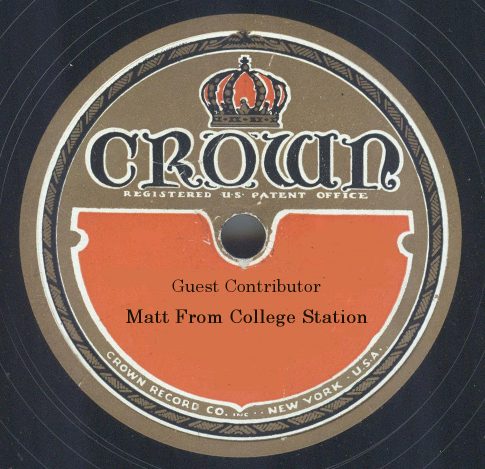 These selections come courtesy of guest contributor Matt From College Station (Now From Florida).   When Matt returned for a visit to Texas over the Christmas holidays he brought along a large stack of records for the Radio Dismuke New Year’s broadcast as well as others for me to digitize.

All of these recordings are from the Crown label, a budget priced label sold through the F.W. Woolworth dime store chain.  The label began in late 1930 and ceased operations by the end of summer 1933.

“One Man Band” was composed by bandleaders Ted Weems and Phil Baxter and was first introduced by the Ted Weems Orchestra.   The song was a follow-up on a couple of other highly successful Weems-Baxter compositions “Piccolo Pete” and “Harmonica Harry.”   Whoever originally owned this particular copy must have loved this recording as much as I do  – it is very worn and was obviously played many times with the heavy tone arm and steel needles of the era’s wind-up phonographs.   Happily my  equipment was able to clean the transfer up far better than I had expected given the condition of the record.

“Hey Young Fellow” was introduced in the 1933 Joan Crawford, Franchot Tone, Clark Gable film Dancing Lady – an early musical talkie that is actually worth watching for more than just the musical numbers.  In the film the song is performed only very briefly by a chorus of burlesque dancers.   This version is a charming Depression era “cheer up” song – and Dick Robertson was a perfect choice for the vocal.

“Two Buck Tim From Timbucktoo” was recorded by a number of bands in both the US and the UK.  This Crown version has some nice hot jazz solos preceding the vocal.

I digitized many more records on both Crown and other labels when Matt visited and will include some in future updates.

2 Responses to Happy Music From The Depression – 1930s Crown Label