Dickie McBride And The Village Boys – 1941 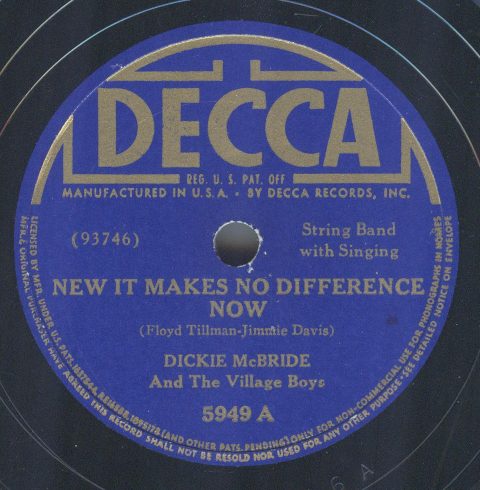 Prior to starting his own band, The Village Boys, Dickie McBride was the guitarist and vocalist for Cliff Bruner’s Texas Wanderers, a successful Western swing band based primarily out of Houston and Beaumont, Texas.  In 1938 the band’s Decca recording of “It Makes No Difference Now” with McBride on the vocal became a country music best seller.   The song was composed by another big name in Western swing – Floyd Tilman.  Its success helped Tilman land his own recording contract with Decca.  When McBride revived the song for his own band the tune was given new lyrics and a modified title “New It Makes No Difference Now.”

“Tulsa Twist” is a good example of the “swing” side of Western swing.

Both of these sides were recorded in Dallas, Texas.

One Response to Dickie McBride And The Village Boys – 1941