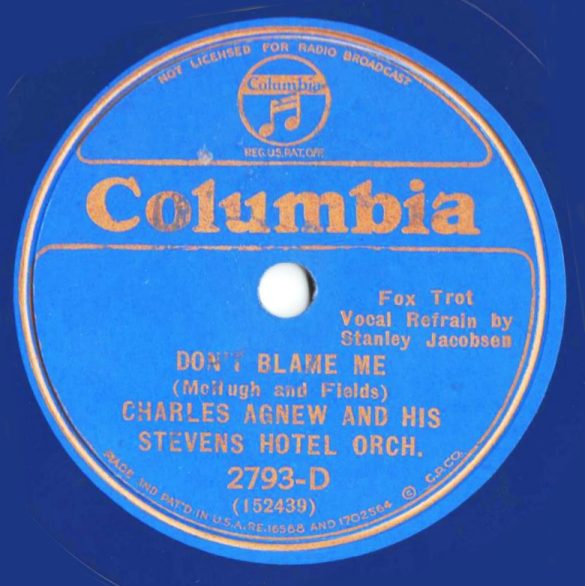 Note:  Today’s update comes courtesy guest contributor Matt From College Station who provides both the recordings and the commentary below.

It is my pleasure to present two recordings from a completely forgotten depression era dance orchestra. A good number of excellent titles from the early 1930s, particularly on Columbia, are overlooked even by fans of 1920s and 1930s music. This is perhaps because of their rarity and lack of availability in digital formats.

The recording selection for this post comes from the only session of Charles Agnew and his Stevens Hotel Orchestra. They cut only four sides on July 25, 1933. These titles are sweet and sophisticated, but not sappy or syrupy. “Don’t Blame Me,” a popular hit in 1933, is a particular favorite of mine due to the sax solo during the verse being very skillfully done. This was his most popular recording, with a review in the New York Times describing it as “richly played.”

“Trouble in Paradise” does hold its own, but is the weaker of the two sides. Stanley Jacobson delivers spot on vocals in the falsetto style popular at the time.

Although few recordings exist of this band, the quality of the arrangements and instrumentation suggest a very skilled and successful orchestra. In fact, Charles Agnew led an excellent “society” band in 1930s Chicago and played such distinguished venues as the Aragon Ballroom and Edgewater Beach Hotel. His band was popular on the NBC radio network throughout the 1930s. He also toured throughout the Midwest during the 1930s and 1940s. In the late 1950s, he switched to a smaller instrumental group format. He died of cancer in 1978 at the age of 77, after being retired from the business for about 10 years.

One Response to Charles Agnew & His Hotel Stevens Orchestra – 1933