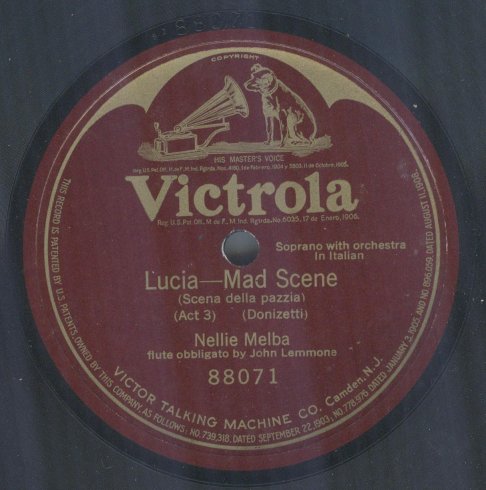 Nellie Melba recorded the Mad Scene on three occasions.   The first was in 1904 in England for the Gramophone & Typewriter Company. That recording was imported into the United States by the Victor Talking Machine company and issued on a specially designed “Melba” label.  After Melba came to the United States in 1907 she re-recorded most of her Gramophone & Typewriter sides for Victor.  Melba’s first recording of the Mad Scene for Victor was made in March 1907 and was issued on catalog number 88071. However, in August 1910 a new version was recorded and it was also issued under the same catalog number.   This was an instance of Victor’s odd practice of occasionally remaking recordings and issuing them under the exact same catalog number (and sometimes even using the same matrix number) as the original.  Thus, if you have a copy of Victor 88071, the specific performance it contains will depend upon whether the record was pressed before or after the 1910 remake.

The version featured here is from the 1910 recording session.  Melba’s records remained in the Victor catalog for many years and my particular copy was pressed sometime between 1918 and 1923 when the Victor name on Red Seal records was changed to Victrola.  It is very possible that I also have a pressing with the 1907 version sitting in a box of 12 inch records that I have yet to sort through.  If I find one, I will definitely put up a posting to allow for a comparison.

A little bit of food trivia:  both peach Melba and Melba toast were named after Nellie Melba.