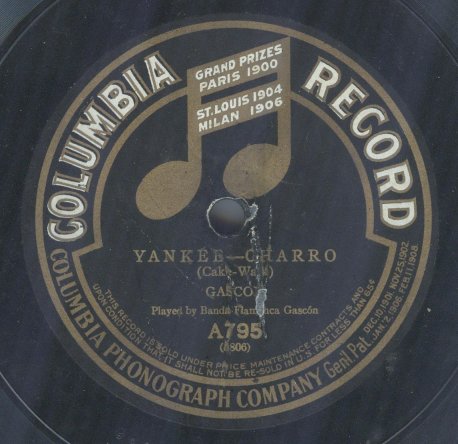 Here is a fun ragtime recording from Mexico – “Yankee Charro Cakewalk.”  The song was published in 1905 and composed by Rafael Gascón who was a popular Mexican bandleader and prolific composer from the late 1800s until his death in 1915.  You can view a photo of the original Mexican sheet music cover at this link.   While Gascón’s most famous work is “Cielo Andaluz,” a pasodoble that is still performed at bullfights, he also composed a number of upbeat popular cakewalks.

As far as I can determine, sheet music for “Yankee Charro” was never published in the United States.  Even though this record was issued in the USA in 1910 as part of Columbia’s main popular catalog series, my very strong guess is that both recordings were from imported masters that were previously made for domestic consumption by Columbia’s Mexican subsidiary.

The composer for “Emperador March” is credited to someone named Trespaille – but I have not been able to locate information as to who that was.  Banda de Rurales de Pachuca was founded in 1901 and is still in existence, though it has since changed its name to The Symphonic Band of the State Of Hidalgo.

This record was recently given to me by a  Dallas area Radio Dismuke listener who contacted me looking for a good home for her late father’s records.  The records are from a pretty wide variety of eras and genres and I have already picked a few out that I will feature in future postings.

One Response to Ragtime & March From Mexico