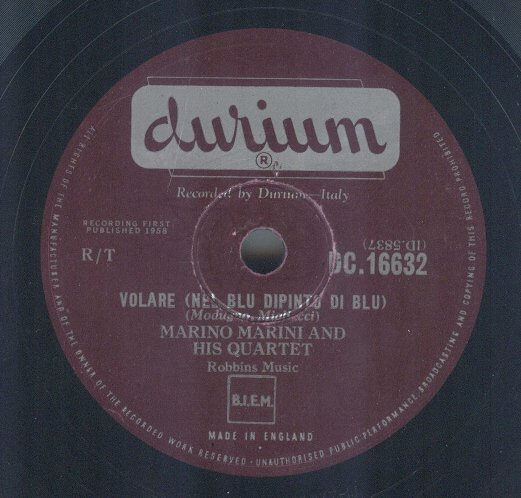 This is the newest record I have featured on this blog.  It was recorded in Italy in 1958 with this particular pressing being issued in the UK market in 1959.  By then most records were being issued on either 45 rpm singles or 33 rpm LPs for albums.  But there were still some households that had older record players capable of only playing 78 rpms. Thus the 78 rpm record wasn’t completely phased out in the Western countries until around 1960.

Marino Marini  is an artist I became familiar with though some 45 rpm records that I have been digitizing for a family member who traveled through Europe in the late ’50s and early ’60s and bought records along the way.

One of the recordings was Marini’s “La Panse” which I found particularly impressive (someone has uploaded it to YouTube at this link – though  I probably ought to warn that some of the images on the video associated with it are mildly NSFW).   A few days after I digitized the 45 rpm of “La Panse'” I stumbled across this Marino Marini 78 rpm in my own collection.  I remembered buying the record not for any musical content that might be on it but rather because it was the first time I had come across a post-war Durium record – a label that was a surviving descendant of the Depression era Hit of the Week records.

Hit of the Week was an inexpensive single sided paperboard record sold at newsstands during the worst years of the Great Depression.  The company that manufactured them was Durium Products – named after the patented resin that was applied to the paperboard and which made such records possible.  The records were initially successful and subsidiaries were formed in Great Britain and in Europe where they were marketed under the Durium name .   The American label ceased production in 1932 but the British and European branches fared better with Italian Durium surviving until 1989.  Between 1957 and 1968 the Italian company issued records for the UK market under the Durium name – which is what the record here is.  All such UK Duriums from the tail end of the 78 rpm era were distributed by Decca.

Marini was one of many artists to record “Volare.”  You can read more about the song and its history at this link.  Of the two recordings featured here, I enjoy “Come Prime” the best.

This entry was posted in Electrical Recordings, Other Foreign Recordings, Postwar Recordings. Bookmark the permalink.