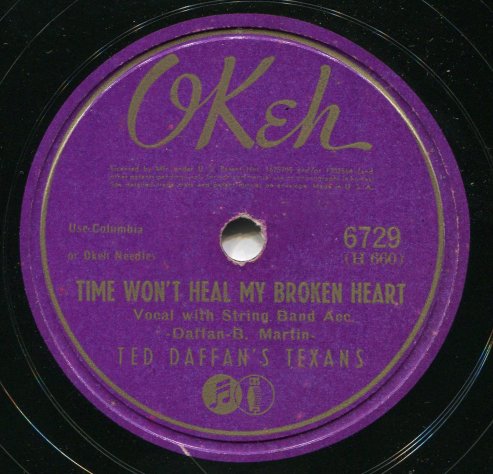 Here is a record I recently stumbled across and picked up.  Vintage country is a genre that I am not extremely familiar with – it is something that I enjoy exploring whenever I can pick records up at a reasonable price.   Some of it I really enjoy – and some of it is simply not to my taste.   This record definitely falls into the category of that which I enjoy.

Songwriter Ted Daffan was a pioneer in the use of electric steel guitar in country music – a melding of a childhood interest in electronics and a fondness for Hawaiian music.  In 1934 Daffan purchased his first amplifier and, with the encouragement of western swing pioneer Milton Brown, performed with various Texas bands for the remainder of the ’30s.

Ted Daffan’s Texans was formed in the Fort Worth/Dallas area in 1940.  The band’s first recording session was held April 25,  1940 in the recording studio located at the Burrus Mill grain elevator in Saginaw, Texas on the outskirts of Fort Worth.  Burrus Mill was the maker of Light Crust brand flour and heavily promoted itself on radio with its own country band The Light Crust Doughboys.  The studios were set up specifically for Light Crust radio broadcasts but were also used for recording sessions whenever the major record labels came to town to record regional talent.   A second recording session was held February 21 and 22,  1941 at the WBAP radio studios at the top of the Blackstone Hotel in Fort Worth.  Recordings from these sessions sold well enough to make the band one of the more successful wartime country groups.

Given that I enjoy this record, I will keep my eye out for records from the Fort Worth area sessions if, for no other reason, then their local history connection.

Both of the recordings here were from a session held February 20 and 21, 1942 at Columbia Records’ studios in Hollywood, California.  Unfortunately, the recording ledgers failed to capture the name of the female vocalist on “You’re Breaking My Heart” and I was unable to find any information about it online.  (If anyone has information about the vocalist, I would be interested in knowing).  While both of these sides were recorded in early 1942, for whatever reason, Columbia (which was the parent company of the Okeh label) decided not to issue them until sometime around January 1945.

I have recently acquired several interesting country 78 rpms and will feature some of them in future postings.