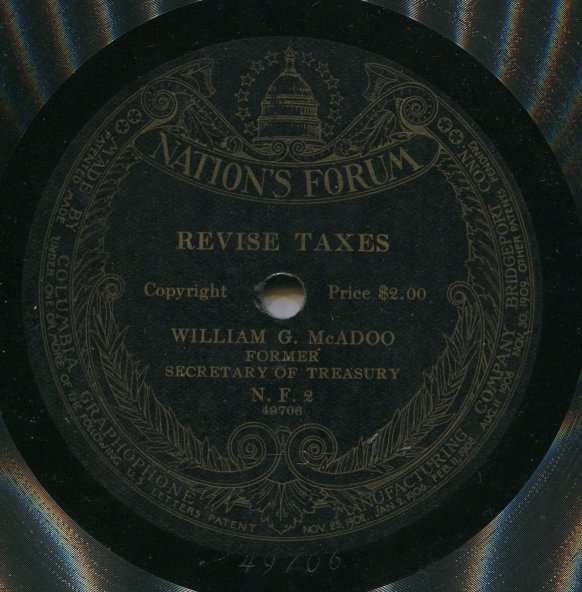 Nation’s Forum was a label issued between 1918 and 1920 that featured recordings by prominent American political leaders of the period.   At the time such records were a bit of a novelty given that, in an era prior to the advent of radio and talking pictures, few American had ever heard the voices of their presidents or other prominent public figures.  Today the records are an interesting time capsule of the hotly debated issues of the time – and, in some cases, the only recordings that were ever made of the speakers.

William G McAdoo was Woodrow Wilson’s Secretary of the Treasurey from the time of Wilson’s inauguration in 1913 through December 1918.  During his time in office he married the President’s daughter, Mary Randolph Wilson.

McAdoo himself ran for president in 1920 but, because of his staunch support for Prohibition,  lost the Democratic nomination to James M. Cox.  He ran again in 1924 and entered the Democratic convention as the front runner.  But McAdoo’s refusal to denounce an endorsement by the Ku Klux Klan resulted in a deadlocked convention between him and New York Governor Al Smith who was Catholic.  The convention eventually nominated a compromise candidate, John W. Davis.

Ostensibly the subject of McAdoo’s talk on this recording is to take issue with the Republican majority in Congress for not lowering taxes in the aftermath of World War I.  But, if you listen carefully, the real point he was trying to make was to argue for Senate passage of the United States joining the League of Nations.

The flip sides of Nation’s Forum records featured recordings of patriotic music which consisted of material that had previously been issued on Columbia records.  While Nation’s Forum was an independent organization, the records were pressed under contract and distributed by Columbia.  This recording of “National Emblem March” by Prince’s Orchestra from July 8, 1916 was originally issued on Columbia A-5848.  The march was composed in 1902 by Edwin Eugene Bagley and was first published in 1906.

What I find amazing about this record is its $2 price tag.  According to this handy online calculator, $2 in 1919 was the equivalent of $27.65 in today’s currency.  For that sum record buyers got exactly what you hear here – a politician talking for four and a half minutes plus a recording by a military band that had already been issued elsewhere three years earlier.

You can learn more about Nation’s Forum records as well as listen to the label’s other issues at this link.