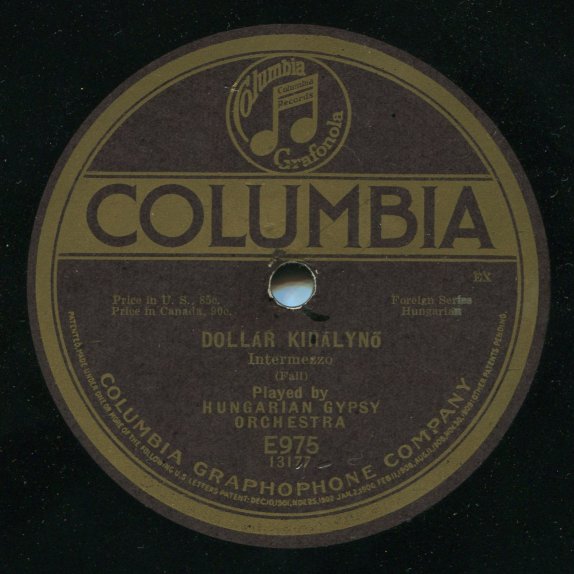 Here are two selections recorded in the old Austro-Hungarian Empire that managed to find their way to the United States for issue in Columbia’s ethnic catalog.

Columbia maintained an extensive catalog of recordings aimed at a variety of niche ethnic markets within the US.   Much of this consisted of material recorded by Columbia’s overseas subsidiaries as well as other record companies in various parts of the world.

Finding information about these recordings was a bit of a challenge in that neither side of the record provides artist credit.  Furthermore, the composer credit on the “Kaszino Dal” side is listed simply as “Hollander.”   There were a number of composers in that period named “Hollander” and, as it turns out, it was only an Anglicization of the actual composer’s name.

Through a lot of searching through German and Hungarian websites (thanks Google Translate!) I was able to confirm that the band on both of these is Béla Berkes Gypsy Orchestra (though he was more frequently credited and referred to as Berkes Béla due to the Hungarian practice of placing the family name prior to one’s personal name).

Violinist Béla Berkes Jr. was one of the most prominent gypsy musicians of his day and held the title of “Official Dance Musician of the Court of the Emperor and King.”  In the years prior to World War I gypsy bands were a commonplace fixture in Budapest restaurants and coffee houses. Reflecting the scope of the era’s popular tastes, Berkes’ band performed tunes from a diverse background ranging from folk songs to light classical to operetta and even ragtime.

Both of the songs here are tunes from the Viennese and German musical stage and were well known throughout Europe.

It was my familiarity with the music from The Dollar Princess that motivated me to put in a bid on this record.  But, when I listened to it, “Kaszino Dal” was the side that I enjoyed best.  After a lot of digging around online I eventually learned that “Kaszino Dal” (“Kasino Lied” /”Casino Song”) is from composer Victor Hollaender’s 1906 musical revue Der Teufel lacht dazu! (The Devil Laughs).

Hollaender (who was the father of the better remembered composer Frederick Hollaender) is regarded as one of the founders of German cabaret. After spending the 1890s abroad as a conductor in Milwaukee and Chicago and as music director for the Barnum & Bailey Circus during its 1896 visit to London, Hollaender was hired as a composer for Berlin’s Metropol-Theater which staged annual, often satirical musical revues.  Because Hollaender was Jewish, when the National Socialists came to power in 1933 his works were outlawed.  He died in exile in the United States in 1940.

In the first two decades of the 20th century, Hollander’s music was well known and he was among the more popular German composers of the day.  Today his works are largely forgotten.   You can read an interesting article exploring some possible reasons why his works were never significantly rediscovered in the decades following World War II at this link,

Both of these selections were recorded in Budapest in 1909 (one source suggests 1908).  I was able to determine that this recording of “Kaszino Dal” was issued in Germany on the Decappo label (Decappo D-8135) while “Dollar Királyno” was issued in Hungary on the Diadal label (Diadal D560 mx 53034).  Both  give artist credit to Béla Berkes’s band.  These recordings were most likely issued in additional countries as well – probably on labels operated by or associated with the German Lindström company.

The matrix numbers on my Columbia copy are 13177 / 13178. Columbia reserved matrix numbers between 12500 and 13499 for Austro-Hungarian material and most records you find with such matrix numbers were recorded either in Vienna or Budapest.  Through the matrix number I was able to cross reference and determine that,  prior to being issued on its ethic series, Columbia also issued “Dollar Királyno” in the United States in 1909 on its mainstream popular series under catalog number A-780. That issue credits the band as “Columbia Band.”  The flip side is “Valse Mauve” which also has an Austro-Hungarian matrix and is credited to “Gypsy Band” – which I suspect is most likely another Béla Berkes recording.

The pairing here for the Columbia ethic catalog (Columbia E975) was not issued until 1912.  The record must have been successful enough to justify at least one additional pressing as the artwork on the label indicates that my copy was pressed sometime around 1918.

One happy outcome of my research on this record was the discovery of a streaming online archive that has a treasure trove of early 20th century Hungarian recordings.  The website is in Hungarian but if you scroll across the drop down menu at the top you can pretty much make out the site navigation – you can navigate by labels, performers, composers, genres and years.   Such an archive is especially great for people such as myself in the United States where European recordings are often difficult to come by and the cost of importing them is high.