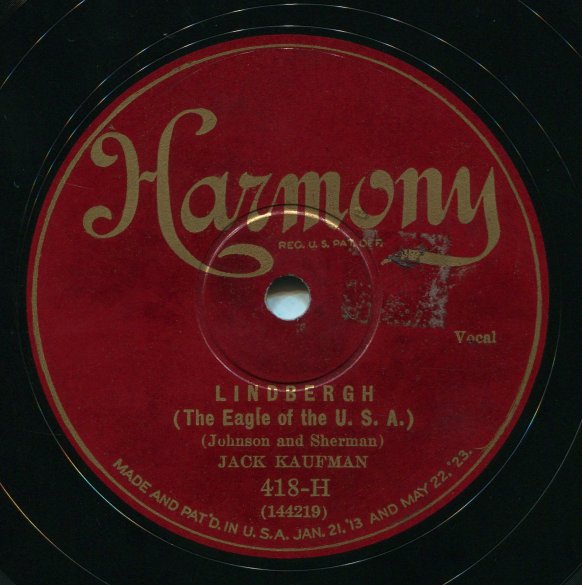 When Charles Lindbergh made his pioneering transatlantic flight on May 20 – 21, 1927 the popular reaction was immediate and enormous:  Lindbergh became an overnight national hero on a scale that is without equal today.   Tin Pan Alley composers and music publishers lost no time in coming up with songs to commemorate the occasion – songs the record labels were eager to quickly record.   What I find remarkable is just how quickly:  these Jack Kaufman recordings were made just four days after Lindbergh touched down in Paris.

The artist best remembered for performing these songs was Vernon Dalhart.   On May 23, Dalhart was in the Victor Talking Machine Co. studios to record “Lindbergh (The Eagle of the USA).”  The very next day he was recording it and “Lucky Lindy” for Columbia.  He didn’t get around to recording the songs for Edison until May 27.  Plus he managed to find time to also record them for Perfect and Gennett as well.

The recordings featured here were also issued on the Diva and Velvet Tone labels which, like Harmony, were Columbia’s budget priced subsidiary labels.

Unfortunately, even though Columbia had converted to electrical recording in 1925, it continued to use its outdated acoustical (pre-microphone) recording equipment for the budget labels until 1929.   By doing so Columbia was able to avoid having to pay royalties to Western Electric which held the patents to the electrical recording process that both it and Victor used.