“Music Of The Spheres” Berlin Philharmonic 1938 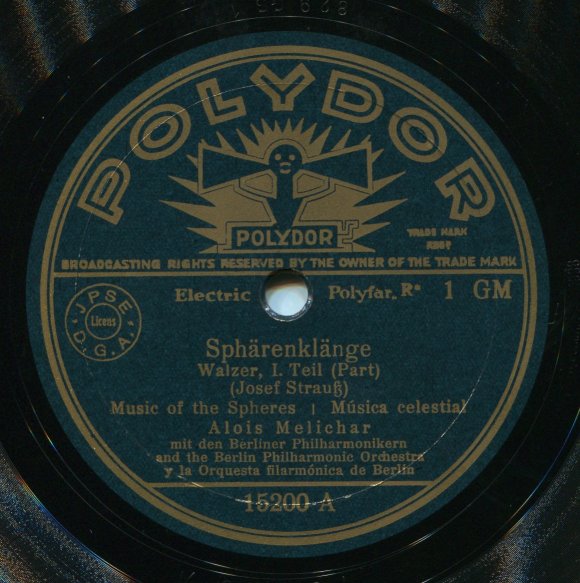 Alois Melichar was a prolific conductor in classical music recording sessions for several major German and Austrian orchestras during the 1920s and 1930s.   I am not sure if he had any formal association with the Berlin Philharmonic beyond the many recording sessions he led.

Unfortunately, this recording was made during a low point in the Philharmonic’s history.  When the National Socialists came to power in 1933 the 51 year old orchestra was in the midst of severe financial difficulties and agreed to become a government funded organization.  As there usually is when one accepts government funding, there were strings attached – and, in this instance, those strings were pulled by Hitler’s propaganda minister Joseph Goebbels.  As was also the case in the Soviet Union, the Nazis used the arts as a means of conferring upon their brutal regime a civilized veneer of culture, respectability and prestige in the eyes of both subjects at home and foreigners.  While only a very small percentage of the Philharmonic’s musicians chose to become members of the Nazi Party, they were required to perform for Party rallies, Hitler Youth functions and for Hitler’s birthday celebrations.  In return, they became the highest paid musicians in Germany with a number of special privileges.  Even during the desperate closing months of World War II, the orchestra continued to perform outside the bombed out ruins of its concert hall and its members were exempt from military service.

For an interesting article on how the Philharmonic was used by the Nazis for propaganda purposes – and by the American occupiers immediately after the war as part of their denazification efforts – follow this link.

The article mentions controversy around Wilhelm Furtwängler who had led the Philharmonic since 1922.  Furtwängler was one of the world’s most famous conductors of his time.   Despite the fact that he openly despised the Nazi regime, he was condemned by many for his refusal to leave Germany and thus enabling the Nazis to exploit his fame as a means of conferring prestige on Nazi Germany.  At this link is a Wikipedia article that is more sympathetic towards Furtwängler and describes his efforts to assist Jewish artists and details several occasions when he openly slighted and/or confronted both Hitler and Goebbels in person.  What I find interesting about the Wikipedia article is how Hitler and Goebbels – who held near absolute power and were certainly not known for their tolerance towards dissent – were so desperate to keep Furtwängler from leaving Germany that they were willing to overlook his open hostility and attempted to accommodate him.