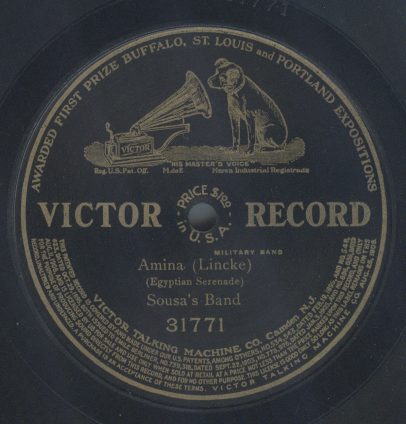 Here is a single sided 12 inch record featuring a song that was written in 1907 by German composer Paul Lincke.

The artist credit on the label is John Phillip Sousa’s band.   But Sousa disliked recorded music so he was almost never present for recording sessions.  Sousa’s assistant conductor, Arthur Pryor, usually directed the band in the recording studio.  On this recording session, however, the conductor is Walter B. Rogers who was, at the time,  Victor’s in-house music director.

One Response to “Amina (Egyptian Serenade)”