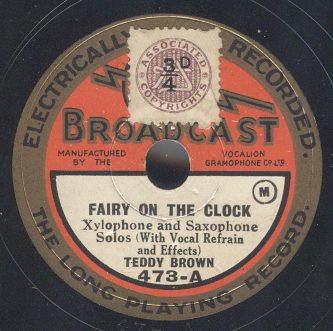 I enjoy xylophone recordings so I was very pleased when I recently had the opportunity to acquire this record.

Born in the United States in 1900 as Abraham Himmelbrand, Teddy Brown performed in vaudeville and for the New York Philharmonic Orchestra in the early 1920s.  He moved to England in 1926 where he became extremely popular and would remain for the rest of his career.

Brown was billed as “The World’s Greatest Xylophonist” and performed using a custom made six octave xylophone – two octaves more than conventional instruments.   He was also an accomplished drummer and saxophone player.   Brown fronted his own dance band and appeared as a featured soloist on recordings made by other British bands.

For whatever reason – perhaps because of Teddy Brown’s influence – xylophone records (and the use of xylophones in dance bands) were much more widespread and popular in the UK than in the USA.