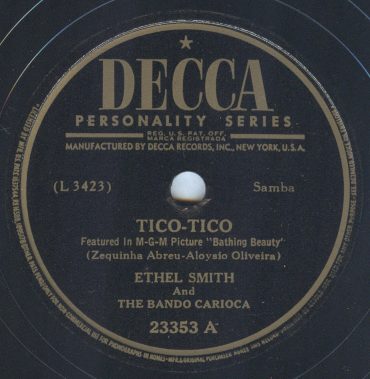 These particular recordings have a certain sentimental value to me.  They come from a four 78 rpm album set entitled Ethel Smith Souvenir Album.  The very first 78 rpm record purchase I made when I was a child was that album which contained three of the four original records plus a different Ethel Smith record that was not part of the album set.  I purchased them in a charity garage sale and paid a grand total of ten cents for all of them.   I still have the album book but all of the records in it managed to get broken over the years.    Last year I obtained another copy of the album set with all four of the records.    I can’t say that the Ethel Smith records were what spurred my interest in vintage recordings – a program on a local radio station is what started that.    But I thought the records were very cool because someone told me that they were “antiques” and because I finally had something to play using the 78 rpm speed on my turntable which I had previously used only to make “normal” speed records sound funny.

This entry was posted in 1940s, American Recordings, Electrical Recordings. Bookmark the permalink.