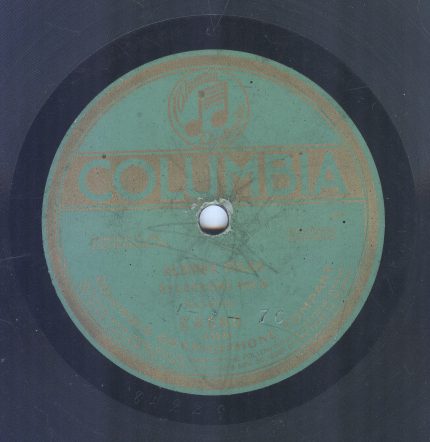 Here is a very charming record I picked up in a used book store the other night for the princely sum of 33 cents.   It is not in the best of shape – but it is hard to complain at the price.   Happily, my audio restoration equipment was able to clean it up enough to at least be able to provide an enjoyable performance.

The record is from Columbia’s green label E series of ethic records – and, as you may have already observed, the green label with gold type makes the label scan difficult to read.

I am fond of both selections on this record. Unfortunately, I have been unable to locate much in the way of information about exactly when it was recorded or who the anonymous band might have been.  Nor is any composer credit provided for either song.

None of my record dating reference materials provide listings for Columbia’s E series and the matrix numbers are from non-standard series as well.  I was able to find the above Columbia Records advertisement from the January 10, 1919 El Paso Herald which mentions the record as a mid-month release.   For the record to have hit stores in mid-January, 1919 it is safe to assume that the recordings were made no later than sometime in late 1918 – though it is possible they might have been recorded earlier.

The Library of Congress has a 1918 copyright listing for an “Albinos Polka” composed by Carl Woess, a prolific but almost completely forgotten early 20th century composer.   My strong assumption is this is the same song.

An article in the May 31, 1892 New York Times mentions a “Naval Cadet March” being performed by Charles A Zimmerman directing the US Naval Academy Band.  The article credited Zimmerman as the song’s composer.   I have no way to verify whether this is the same song as on the record – but I think it is quite possible.

This entry was posted in 1910s, Acoustic Recordings, American Recordings. Bookmark the permalink.