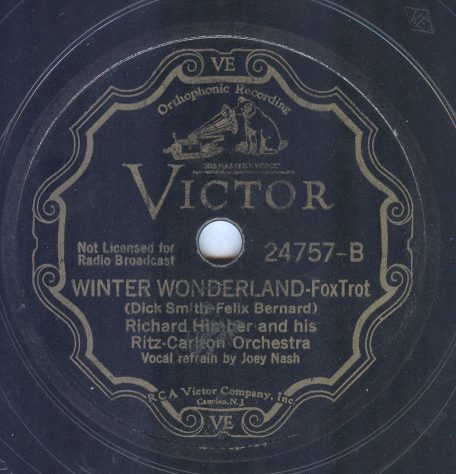 This will be my last posting before Christmas so I thought it would be nice to feature something in theme with the holidays and to tell the story of a how a now familiar holiday classic came close to having been overlooked and forgotten.

The very first recording of “Winter Wonderland” was this version by Richard Himber And His Ritz Carleton Orchestra.   The song’s lyrics were written in early 1934 by an obscure song writer named Dick Smith after he observed children playing in the snow from his window in a Scranton, Pennsylvania sanitarium where he was sick with tuberculosis.  Smith took the lyrics to his friend, pianist Felix Bernard, who composed a tune to go with them.   The song might well have been lost had it not come to the attention of Joey Nash, the vocalist for Richard Himber’s popular New York City society orchestra.

“A fan in my neighborhood, Bernie Smith, told me about a song his brother Dick, a patient in a Pennsylvania sanitarium, had co-authored with Felix Bernard.  He showed me a penciled manuscript and played a wheezy, home-made recording of “Winter Wonderland.”  I liked the unique, sleigh bells-snowman romantic lyrics and its lovely melody.  I learned Donaldson-Douglas-Gumble music publishers had accepted the tune and evidently forgot about its existence.

I introduced “Winter Wonderland” on the air and on this Victor date [October 23, 1934] the band and I were scheduled to record it.  Due to technical difficulties, time had run out and the session ended without the song being made.  Himber had left the studio and the musicians were packing up. I so wanted to do this tune, I asked the band, as a favor to me, to try for a master.  They agreed, but it would be a one-shot try.  If something or someone fouled it up, well, that would be just too bad. (In those days, before tape recording, a rendition had to be faultless from start to end: if not, you had to do it again – and again.)  It was a perfect performance…

Joey Nash’s performances on Richard Himber’s radio broadcasts brought the song to the attention of bandleader Guy Lombardo who recorded his own version for Decca the day following Himber’s recording session.  Lombardo’s recording was released in December and it quickly climbed to number 2 on the Billboard charts.    Ted Weems recorded the song for Columbia on November 11 and it reached Billboard’s number 13 position.

I do not have a copy of either the Guy Lombardo or Ted Weems version.   The Weems arrangement is excellent – and you can hear a very clean recording of it on a royal blue wax Columbia via YouTube at this link.

I do not have an exact date for the British recording featured here by the Harry Leader band – but it is from sometime in 1935. The recording is from an eight inch Eclipse record.  Eclipse was an in-house bargain label sold through the British branch of the F.W. Woolworth dime store chain from 1931 -1935.

Dick Smith lived to see his song become a hit before the tuberculosis took his life on September 28, 1935 –  just one day prior to his 34th birthday.

One Response to The Story of “Winter Wonderland” – 1934