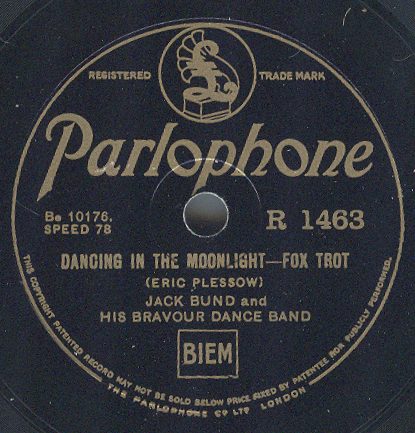 Jack Bund And His Bravour Dance Band – Dancing In The Moonlight

Jack Bund And His Bravour Dance Band – The Two Guitars

So where to begin?  I have a huge record collection and I have to pick out just one record as the very first to be featured on my brand new blog.   I’ve decided to make “Dancing In The Moonlight” this blog’s debut recording simply because I think it is one of the more lighthearted recordings that I own.   I acquired this record about a year ago and regular listeners of Radio Dismuke have probably heard both sides in its playlist.

My copy is a British pressing on Parlophone – the original release is on German Odeon titled “Tanz im Mondschein” by Hans Bund’s Bravour-Tanz Orchester.  Perhaps they thought that the name Jack would sell more recordings in England than Hans.

“Tanz im Mondschein”/”Dancing In The Moonlight” is a nice example of novelty piano ragtime – a genre popularized in the United States in the early 1920s by Zez Confrey at the very tail end of the ragtime era.  By the early 1930s the genre seemed to have enjoyed much greater popularity in Germany and Britain than it did in the US.  The song’s composer, Eric Plessow (1899 – 1977)  authored a number of popular German novelty piano compositions.  He also composed under the pseudonym of Ewald Walter.

“The Two Guitars”/”Zwei Gitarren” is also a memorable recording with a nice Eastern European sort of sound to it.

Between updates here, I will also be sending out recommendations and links to 78 rpm era recordings elsewhere on the Internet via my Twitter Account.  My most recent tweets will also display in the “Recent Tweets” section on the right hand column of the screen.

7 Responses to Jack Bund And His Bravour Dance Orchestra