Leave It To Jane 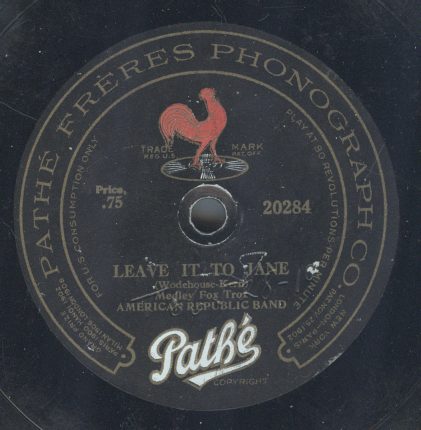 Here is a medley recording of selections from the 1917 Jerome Kern musical Leave It To Jane.   Other labels issued medley recordings from the musical but what I like about this Pathe version in particular is the prominence it gives to the catchy song “The Sun Shines Brighter” which is the opening and closing selection.   The other two songs featured in the medley are “Leave It To Jane” and “The Crickets Are Calling.”

You can hear a very different medley recording by the Victor Light Opera Company  here which includes lyrics and additional selections.

The American Republic Band was an in-house band for Pathe.  Pathe was a pioneering French record label which opened a United States branch in 1914.  As was also the case with Edison records, because Victor and Columbia still controlled the patents for the lateral grooves found on conventional 78 rpm era records Pathe records had vertical “hill and dale” type grooves that were previously used on cylinder records.  The records were designed to be played only on Pathe phonographs which used a sapphire ball styli rather than the single use steel needles used for conventional lateral records – though some companies did market special adapters that could be attached to other brands of phonographs.   To play vertical recordings on a modern turntable requires either a vertical/lateral switch on the phonograph or sound system or a cartridge which has had the wiring reversed.  For that reason a lot of collectors tend to pass them over.