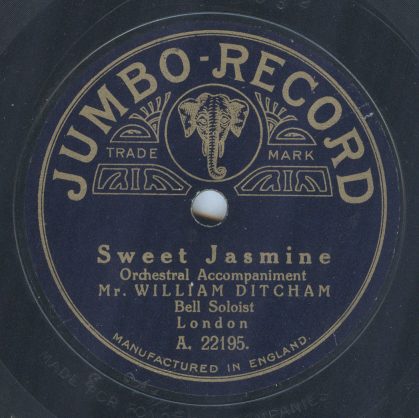 This record comes from the collection of my friend Christian From Dallas who has kindly loaned me a few boxes of records from his collection so that I might share some of them here.  I will be mixing in some of Christian’s records in with my own for upcoming updates.  Christian’s collection is especially strong in the areas of ragtime, salon orchestras, operetta and World War I patriotic recordings – so I am going to take special advantage of his records in those particular genres.   As with all records posted to the site, all credit/blame for the transfers and audio restoration goes to me.

No composer credits are provided on the label for either song. But I was able to quickly determine that “Sweet Jasmine” was composed by Olly Oakley, an early British ragtime banjo player.  You can listen to Mr. Oakley perform the song on banjo on this YouTube clip.

I have not been able to find any additional information about the song  “Laughing Ben.”

Recordings of both songs being performed by Mr. Ditcham are listed in the online CHARM database and indicate recording dates in 1910.  But the listings in the database provide catalog and matrix numbers for the HMV label.   The recordings presented here are on the Jumbo label issued by the German owned Fonotipia Ltd which was also affiliated with the German Odeon label. In the runout groove are Odeon matrix numbers which suggest a 1911 recording date.  At the time it was not uncommon for recording artists to record the same song for multiple record labels.  So my guess is that recordings here are different than the ones listed in the CHARM database and were recorded some months later.