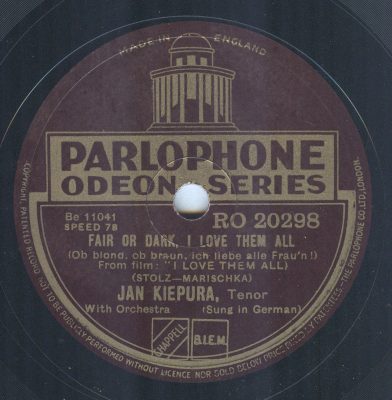 This record comes from the collection of my friend Christian From Dallas who has kindly loaned me a few boxes of records from his collection so that I can digitize and share them here.   As with all records presented on this site, all credit/blame for the transfer and audio restoration goes to me.

Jan Kiepura was a Polish tenor who was enormously popular internationally during the 1930s both as an opera performer and a film star.  Both of these selections were composed by Robert Stolz and are from the 1935 film Ich lieba alle Frauen in which Kiepura starred.

In 1936, Kiepura married Austrian singer and film star Marta Eggerth and the couple regularly performed together until Kiepura’s death in 1966.  Eggerth has continued performing well into her late 90s and will celebrate her 100th birthday in April.