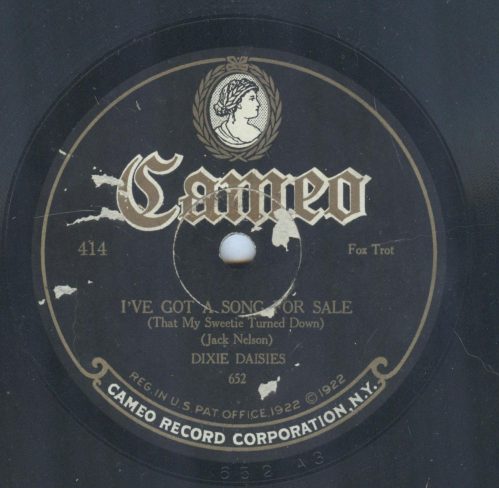 Dixie Daisies – I’ve Got A Song For Sale]

Here is an acoustically recorded (i.e., pre microphone) Cameo record from 1923.   Cameo was a bargain priced label sold through department stores such as Macy’s as well as through the S.S. Kresge dime store chain (which, decades later, eventually became K-Mart).

Both the “Dixie Daisies” and “Ernest Carle” were recording pseudonyms.   Most of the bands on Cameo  during this period consisted of local New York City musicians assembled specifically for the recording session.   Both sides of this record were also issued on Cameo’s subsidiary label Lincoln (Lincoln 2103) with the pseudonym for the Dixie Daisies side changed to “Beale Street Five.”

“I’ve Got A Song For Sale (That My Sweetie Turned Down)” was also recorded by pretty much every  other American record label of the era including  versions by Original Memphis Five on Victor, Ladd’s Black Aces on Gennett, Frank Westphal on Columbia and Sam Lanin on Banner.   I enjoy the “wa wa wa” vocal effects at the beginning of this recording.