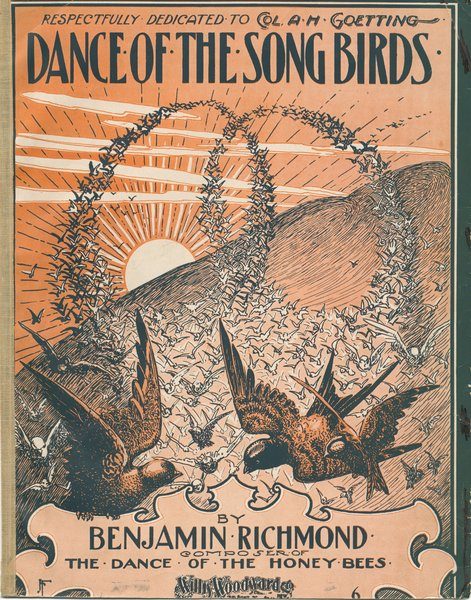 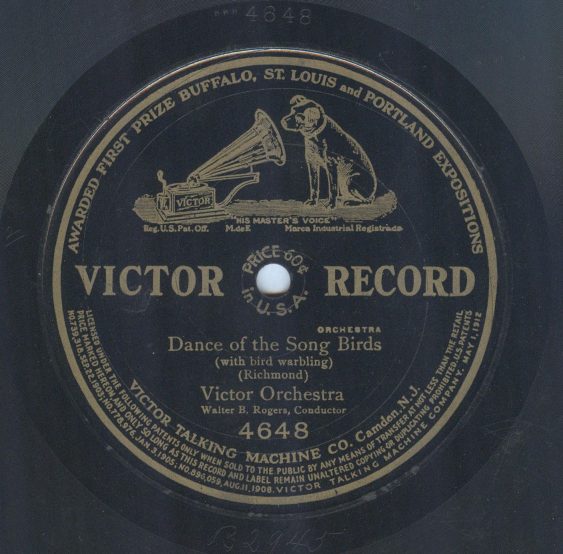 Victor Orchestra – Dance Of The Songbirds]

This one sided Victor record from 1905 comes from the collection of my friend Christian From Dallas who has loaned me a few boxes of records to sort through and digitize for the blog.   It features a very charming song by turn of the century composer Benjamin J Richmond.

Unfortunately, I have not been able to find much in the way of biographical information about Richmond (and it is also possible that “Benjamin Richmond” was but a pen name.)    In addition to “Dance Of The Song Birds” Richmond wrote “Dance Of The Honey Bees,” “Dance Of The Sparrows,” “Dance Of The Stars,” “Dance Of  The Bumble Bees”  as well as “Falling Star,” “Sparkling Stars” “June Roses” “When The Robin Calls Its Mate,” “Ohmar Khayyam,” “Yankee Notions” and “Campus Rag.”

Victor rerecorded “Dance Of The Song Birds” in December 1913 (Victor 17521).  The later recording was also issued under the name “Victor Orchestra” and featured whistling by Joseph Belmont.