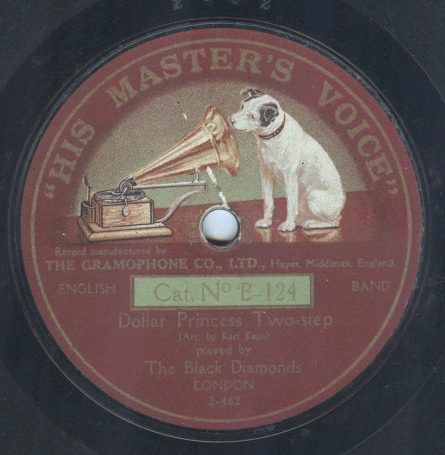 Here are two more selections in an ongoing series featuring recordings from the collection of my friend Christian In Dallas who has loaned me a few boxes of his records to digitize and share on this blog.

The Black Diamonds recorded many dozens of records for the British HMV label.  I am guessing that they were an in-house studio band – but that is only a guess.   According to the CHARM database the conductor on “Irish King March” was Eli Hudson who was a famous flute player of the era.   In additon to Hudson, other Black Diamonds recording sessions were conducted by violinist George W. Byng.

While both of these selections were recorded in 1910, the catalog number on this double sided pressing dates to 1912.   I suspect that there is a strong possibility that both selections were previously issued in 1910 on separate one-sided records.

This entry was posted in Uncategorized. Bookmark the permalink.