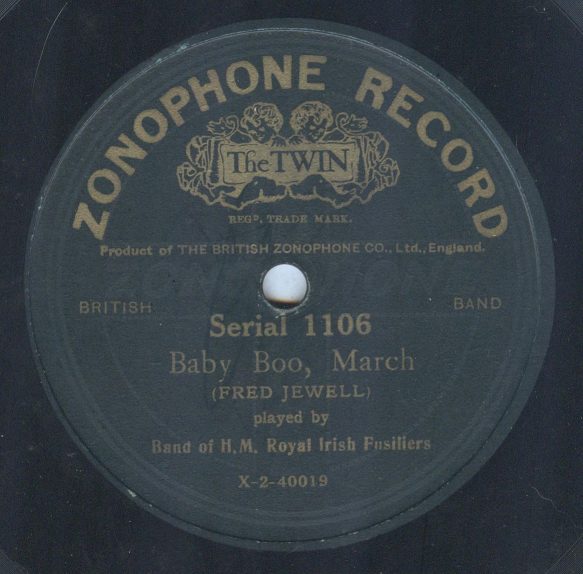 Here are a couple of marches from a 1913 British Zonophone disc – part of an ongoing series of selections from the collection of my friend Christian From Dallas who has loaned me a few boxes of records to sort through and digitize for the blog.

Here is a link where you can learn about the Royal Irish Fusiliers.

“Baby Boo March” was published in 1904 and composed by Fred Jewell who, at age 16, ran away and joined the circus and spent much of his career conducting bands for various traveling circuses.   The song commemorates the birth of an elephant at Baraboo, Wisconsin where the Ringling Brothers circus was spending the winter.  When he wrote the song he shortened the name to Baby Boo.

“Gardes du Corpes March” was composed in 1896 by American song writer Robert Browne Hall who wrote a number of marches and whose works were especially popular in Great Britain.

This entry was posted in 1910s, Acoustic Recordings, British Recordings. Bookmark the permalink.