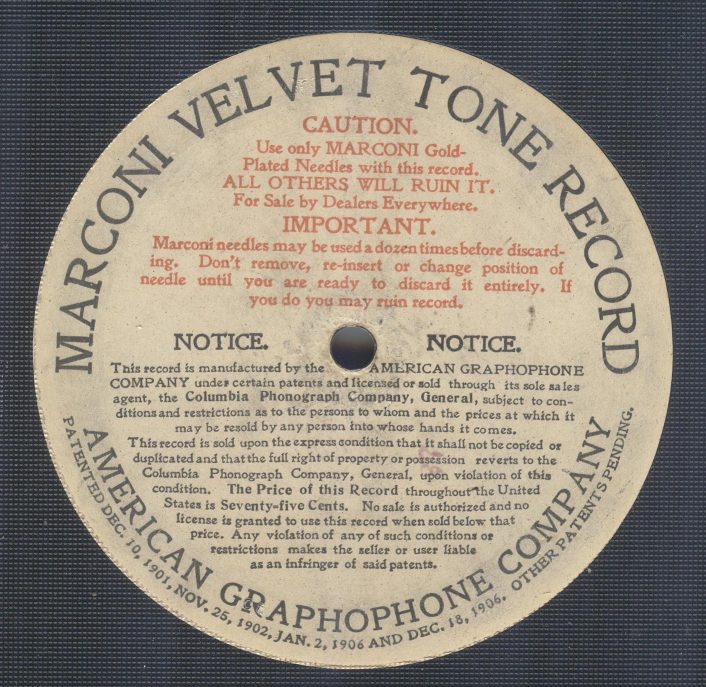 Here is a recording on the rare Marconi Velvet Tone label, a product of the American Graphophone Company which also manufactured Columbia records.

Unlike the heavy shellac discs of the era, Marconi Velvet Tones were light-weight and made with a paper core and a laminated celluloid surface.  The records required special gold-plated needles which were good for up to twelve plays –  playing them with standard single-use but inexpensive steel needles would destroy the soft surface of the discs.   The Marconi records were not commercially successful and production was discontinued only a few months after the first ones hit the market in late 1907.   The only known contribution that Guglielmo Marconi made to the product beyond authorizing the use of his name was a 1906 tour of Columbia’s Bridgeport Connecticut pressing plant.

The content on Marconi Velvet Tone consisted of recordings that had already been issued on Columbia discs.   The records cost 75 cents  – which, in today’s currency, would be in excess of $17   For that, one got exactly what you hear – a single-sided record with just under three minutes of music.

This particular recording was recorded in early 1902 and originally issued on Columbia 561.   It was reissued again in 1908 paired with “At A Georgia Camp Meeting” on Columbia A-86 when Columbia came out with its new double-sided discs.

“Strauss Autograph Waltz” was written by British born composer Alfred E. Warren who moved to Boston in 1861.   The song was published in 1872, the same year that Johann Strauss II made an American concert tour with performances in Boston and New York.  For many years, the song was widely but incorrectly mistaken as an actual Strauss composition as a result of its publication in England being credited to Strauss.   Given the number of references to it in period publications, the song was apparently fairly well-known in the USA during the years immediately after its publication.