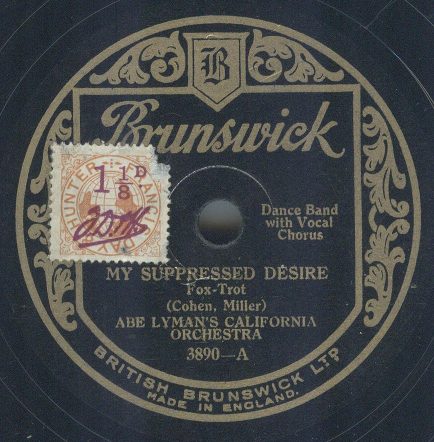 One of the things I find interesting about the popular music from the early decades of the twentieth century is how rapidly music styles evolved and fell out of fashion.   As an example here are two records by Abe Lyman’s orchestra recorded just under three years apart (November 2, 1928 and October 23, 1931).   By the end of 1931 the Jazz Age style and frenzy of “My Suppressed Desire” was very much out of date and certainly out of step with the Depression era mood.   While there is a definite Jazz Age influence in “Ooh That Kiss” the mood is much more subdued and there is a far greater emphasis on the lushness of the arrangement – which is even more pronounced on “You’re My Everything.”   Just a few years later musical styles were transformed again with the advent of the swing bands.

One of the factors that drove this rapid pace of change was the fact that there were far fewer media outlets and records were still very expensive to produce and purchase.   Even very large cities had only a handful of radio stations and, in those days, many hours of programing was devoted to non-musical performances.   A radio station with any sort of “oldies” type format was unheard of until several decades later.    And, because records were expensive it was not economically viable to have the sort of back catalogs and specialized niches that we take for granted today.

Therefore, the pressure for both the music and broadcasting industries was to be constantly ahead of the curve in terms of  appealing to the widest possible common denominators of the moment.    A bandleader who failed to stay up-to-date with the latest styles would have soon found himself no longer welcome in the studios of the record labels and broadcasting networks.  Guy Lombardo was a notable exception – his saccharine-sweet style was so unique he was able to remain successful with it for over five decades.   But for a bandleader such as Abe Lyman, who was active from the early 1920s to the late 1940s, survival meant being willing to adapt to the popular mood of the moment.

My copy of “My Suppressed Desire”/”Sweethearts On Parade” is on a pressing issued by Brunswick’s British subsidiary.   Notice the stamp in the label image.   The purpose of this stamp was to indicate that the record label had paid the necessary mechanical royalties on the musical composition.   Such stamps were common on British and European records – though, in many instances, the indication that the royalty was paid was pre-printed on the label thus making a stamp unnecessary.   The catalog number for the American issue of the record was Brunswick 4117.