Ozzie Nelson And His Orchestra – 1937 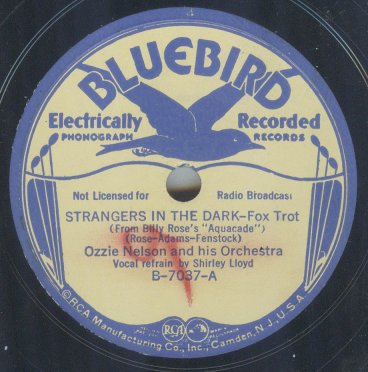 While Ozzie Nelson is best remembered for his long-running radio and television program The Adventures of Ozzie and Harriet,  during the 1930s and early 1940s  Nelson was the leader of a popular dance band.

Both of the songs on this record are from Aquacade, a music, dance and swimming show produced by Billy Rose and first performed at the 1937 Great Lakes Exposition. Later Aquacade was staged at the 1939 New York World’s Fair.

A bit of trivia about vocalist Shirley Lloyd – according to bandleader Charlie Barnett’s autobiography she and Barnett were very briefly married.  Lloyd, Barnett as well as Artie Shaw and Claude Thornhill were at New York’s Onyx Club one evening and all had too much to drink.  Barnett managed to convince Lloyd that they ought to elope so the group went to Armonk, New York where a 4 AM marriage ceremony was performed by a reluctant justice of the peace.  By the time everybody sobered up Barnett and Lloyd both realized that they had made what Barnett later described as “a serious error” and the marriage was quickly annulled without having been consummated.