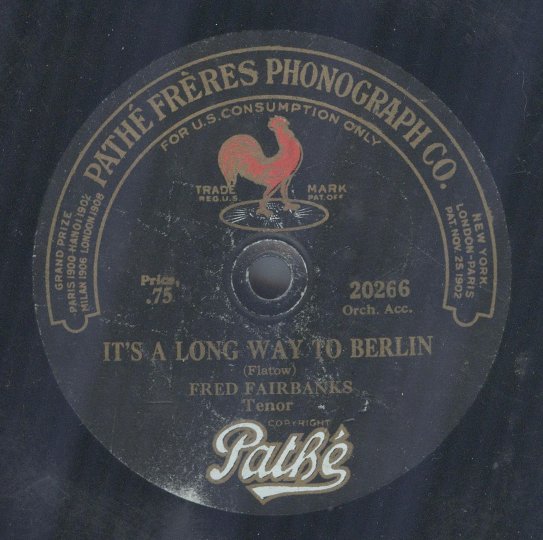 This weekend was the 100th anniversary of the assassination of Archduke Franz Ferdinand which sparked the start of World War I – aftershocks of which continue to be felt even into our own time.

Here is a song that was popular in the United States soon after it had joined the war a few years later.   It was composed by Leon Flatow, a pianist who also wrote theme songs for silent films, with lyrics by vocalist Arthur Fields.

This recording is from a vertically cut Pathe record.  Such records had a different type of groove than the standard disc records of the day and require specialized playback equipment.  I have written about the difference between Pathe records and more conventional records in my August 2, 2011 posting.   You can hear more selections from Pathe discs in that posting as well as in my June 26, 2013 posting.

Unfortunately, I have not been able to locate any information at all as to who Fred Fairbanks might have been – nor have I found any sort of indication that he made any other recordings besides this one.