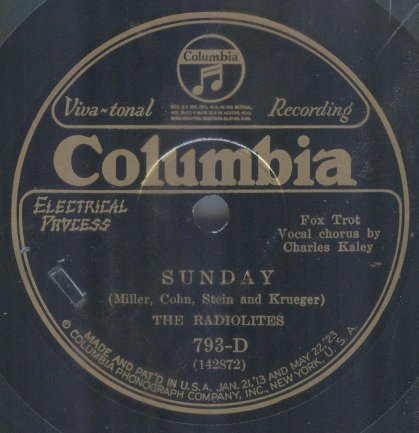 Here is a fun record I obtained a few years ago as part of a large acquisition.  For whatever reason, I set it aside and did not listen to it until recently.  Let’s just say that it was a very pleasant discovery.

A number of different artists made recordings of “Sunday” – but this spiffy version is by far my favorite rendition.

“The Radiolites” was a recording pseudonym for the in-house Columbia band led by Ben Selvin.  Vocalist Charles Kaley performed on records and in vaudeville where he was billed as “The Singing Bandleader.”  Later he went to Hollywood where he starred in the 1930 musical film Lord Byron of Broadway.