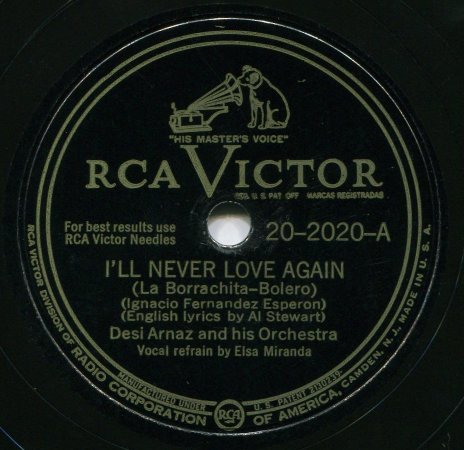 Desi Arnaz is still famous as Lucille Ball’s husband both in real life and on their landmark 1950s television comedy I Love Lucy.  But before his career in television Arnaz was already well-known as a successful Latin bandleader.

Puerto Rican vocalist Elsa Miranda performed in the United States and Argentina and is best remembered for her promotional appearances in the role of Miss Chiquita Banana.

This is not a record I would normally go out of my way to pick up – my collecting interest is primarily in the pre-World War II decades.  But I came cross it recently at a second hand bookstore and, since it cost less than a dollar and I was feeling adventurous, I went ahead and got it and a stack of other assorted 1940s material.

I think “I’ll Never Love Again” is a nice song.  But I can’t say that “Tia Juana” does much for me. Perhaps your mileage will vary.