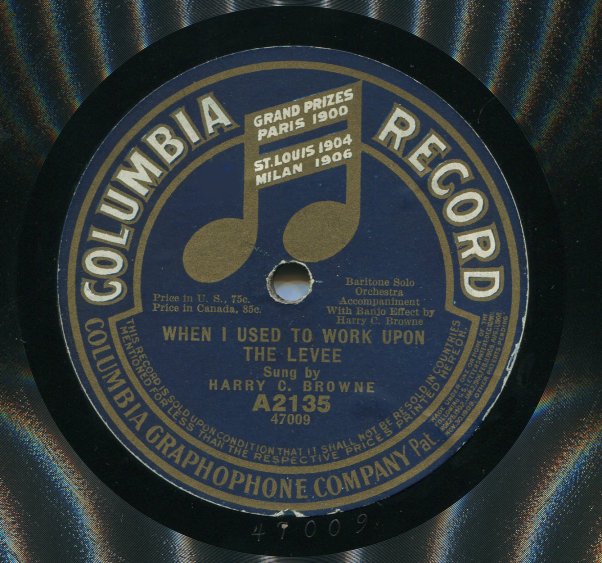 Note:  The recordings in this posting contain lyrics with language and stereotypes that reflect historical attitudes and mindsets that decent people today find offensive.  I made the decision to post them because I consider such recordings to be important historical documents – not only of the past but also of the progress our culture has made in the decades since.

I recently found these recordings in a box of unsorted records I acquired some time ago.  The note on the label indicating “orchestra accompaniment with banjo effect” caught my attention and I pulled this record out thinking that it might contain some banjo ragtime.  Instead, both sides turned out to be songs from the Civil War era.

Of the two, I find “Kingdom Come” to be the most interesting.  The song’s actual title is “Kingdom Coming” (I am not sure why Columbia records changed it slightly).  It was composed by Henry Clay Work in 1862 prior to Lincoln’s Emancipation Proclamation.  The lyrics describe the celebration of liberated slaves whose master has fled as a result of approaching Union troops – and how the overseer was locked in a cellar with the key thrown down a well.

The words of certain passages in the recording are a bit difficult to make out.  You can read more about the history of the song and see the lyrics at this link.

“When I Used To Work Upon The Levee” is a title that Columbia records gave the second song which was composed by Edward Warden and published as “Tapioca: A Minstrel Melody.”  The original sheet music does not provide a publication date – but I found the lyrics listed in a digitized copy of an 1863 edition of Beadle’s Dime Song Book.

The lyrics are almost impossible to make out when listening to the recording – they are sung so fast and include lots of period slang and dialect. You can view the original published lyrics at this page on the Library of Congress website.  Browne does not sing the lyrics in the original order and he also sings a passage that was apparently added at a later date.

I have not been able to figure out what the word “tapioca” in the original title refers to.  Whatever it meant, perhaps by 1916 it was obscure enough to have inspired Columbia records to come up with a different name for the song.

Actor and banjoist Harry C Browne appeared in vaudeville and early silent pictures and eventually became an announcer and production director for CBS radio, a position he resigned in 1931.

This entry was posted in 1910s, Acoustic Recordings, American Recordings. Bookmark the permalink.