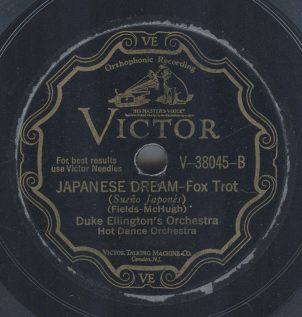 Here is a Duke Ellington record I acquired a couple of years ago.  I held off on digitizing it for inclusion in the Radio Dismuke playlist so that I could feature “Japanese Dream” along with other records not in the station’s regular rotation on the 2009-2010 New Year’s Eve live broadcast.   After the broadcast, I set the record aside and, until recently, completely forgot about it.

This record is from Victor’s V-38000 catalog number series.  The series was launched in 1929 and was devoted exclusively to recordings by black musicians.  Victor advertised it as their “red hot dance” catalog.   Unfortunately, because of the onset of the Great Depression and declining record sales, the series was discontinued a year later.