Josephine Bradley And Her Ballroom Orchestra 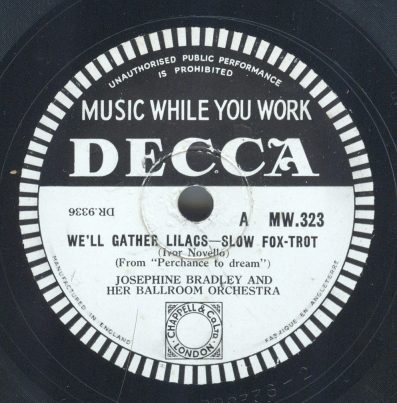 Here is a record from English Decca’s special “Music While You Work” series which was issued between 1943 and 1947.    The series was named after the BBC radio program Music While You Work which debuted in 1940.   The purpose of the program was to provide periods of uninterrupted on-the-job music to war time factory workers as a means of boosting morale and productivity.  The daily half-hour program was broadcast live and was so well received with both the factory workers and the general public that it eventually offered a morning, afternoon and late night edition.    The program outlasted the war by more than two decades with its last broadcast airing in 1967.

Because of the radio program’s success in the factories, some factory owners began using public address systems to broadcast phonograph records to their workers.   Decca’s Music While You Work series was created to provide music suitable for that purpose – though the records were also available for purchase by the general public.

Josephine Bradley was a famous ballroom dancer and instructor.  Her recordings were designed to provide strict tempo music for dances and dance schools – and, in this case, apparently for factory work as well.    Both of these recordings are very similar in style to those of another dance instructor/bandleader, Victor Sylvester, who I will feature in a future update.

One Response to Josephine Bradley And Her Ballroom Orchestra