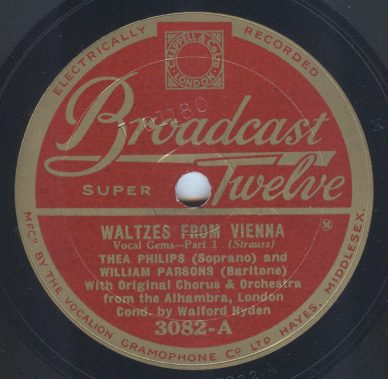 You can find biographical information about Thea Philips here.  Unfortunately, I have not been able to locate any information about William Parsons.   From 1910 through 1930, conductor Walford Hyden toured with and worked as rehearsal pianist for the famous ballerina Anna Pavlova.   He also wrote a book shortly after she died about his recollections of her.

The label credit also mentions “original chorus and orchestra from the Alhambra, London.”   The Alhambra Theatre was located on London’s Leicester Square and dated back to the 1850s.  The theatre was demolished in 1936.