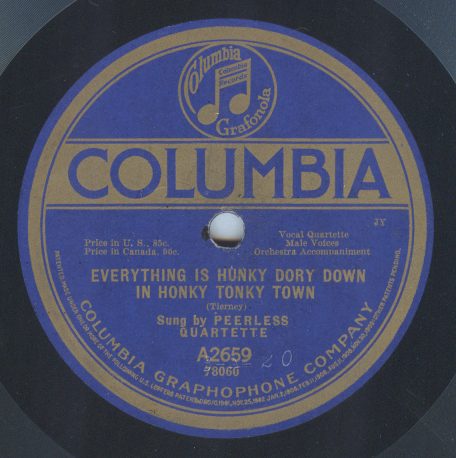 My first exposure to the song “Everything Is Hunky Dory Down In Honky Tonky Town” was on a 1918 medley recording combined with the World War I song “Oui Oui Marie” by Yerkes Jazarimba Orchestra.  That version was played in a very peppy, upbeat ragtime style and was featured on the January 25, 2007 update (recording requires RealAudio) of my now discontinued Dismuke’s Hit of the Week site.   I thought the song was catchy and began to look for other versions of it.    This recording by the Peerless Quartette features the lyrics – but I much prefer the Yerkes Jazarimba version.    The song is from the 1918 musical review Everything which ran for 416 performances at New York’s Hippodrome Theatre.

“Merrily We’ll Roll Along” is one of many World War I patriotic songs that were published and recorded in 1918.   The song was composed by Abner Silver and was written around the famous chorus of “Goodnight Ladies,” a folk song which dates back to 1847.