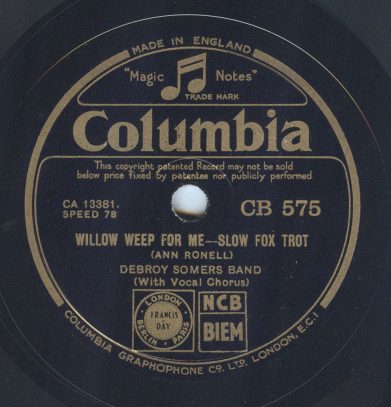 In my August 31 posting about the Savoy Orpheans I mentioned that the band was founded in 1923 by Debroy Somers and that he left the band in 1926.   Here is a 1933 record by the band that Somers subsequently formed after leaving the Orpheans.

“Willow Weep For Me” is a composition that is still played by many jazz ensembles.  The song also had a successful 1964 revival by the British rock duet Chad & Jeremy.

“Look What You’ve Done” was introduced by Eddie Cantor and Lyda Roberti in the 1932 film The Kid From Spain.