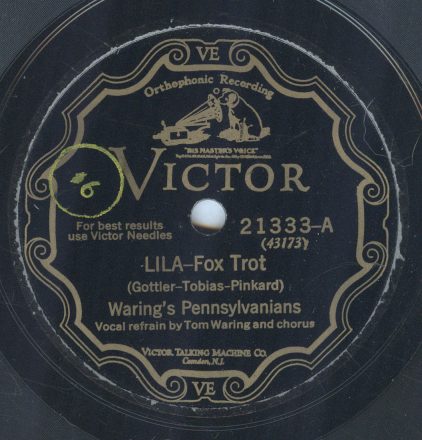 Here is a peppy recording I listened to for the first time while selecting records to play on the recent Radio Dismuke New Year’s Eve broadcast.

Fred Waring led what was, in my opinion,  one of the better dance bands of the ’20s and early 30s.  It was certainly among the most successful – at times during the 1930s Waring’s Pennsylvanians had as many as 70 musicians and vocalists on staff and was earning $10,000 Depression era dollars per week for its radio broadcasts alone.

Unfortunately, 78 rpm records do not document how the band’s sound evolved with the changing musical tastes of the 1930s because Waring refused to enter the recording studio for a full decade beginning in late 1932.  Waring, like other on-air bandleaders, felt that the then legally ambiguous practice of small, non-network affiliated radio stations spinning commercial phonograph records undercut and diminished his live, network broadcasts.   By the time Waring resumed recording in the 1940s he had largely transitioned the Pennsylvanians away from a being jazz oriented dance band into a choral glee club format which he continued to lead into the 1980s.

Outside of the entertainment world Waring was a successful entrepreneur producing and holding the patent to the still manufactured Waring Blender.