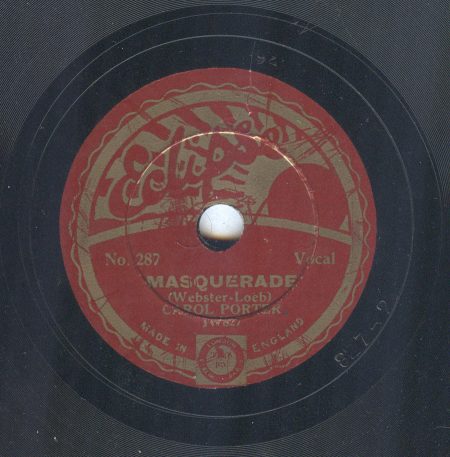 Here are a couple of recordings by vocalist Jack Plant who made recordings with a number of 1930s British dance bands.  “Carol Porter” is but a pseudonym that was used for his recordings on the Eclipse label which was sold through the British branch of the F.W. Woolworth chain.

“Masquerade” is a very charming waltz and was the first commercial success for lyricist Paul Francis Webster.   In the United States Ted Black and His Orchestra’s recording of the song achieved a number three spot on the Billboard charts.

I attempted to do an online search for information about the song “Tomorrow” but, unfortunately, a title consisting of a single commonplace word makes it rather difficult.  The label credits the song to a “C. Tyne” but I have not been able to locate any information as to who this might have been.