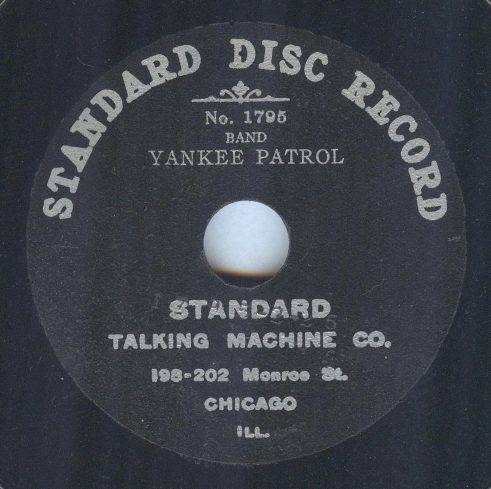 Here is a one-sided Standard Disc Record that I set aside when I was searching for the 1905 Standard record of “Silver Heels” that I featured on my April 15 posting commemorating the 100th anniversary of the sinking of the Titanic.

As I mentioned in the April 15 posting, Standard Disc Records were pressed by Columbia on a contract basis for the Standard Talking Machine Company of Chicago using recordings that had already been issued on the Columbia label.

For this recording the artist credit on the original Columbia issue was “Columbia Band.”  On the Standard issue it is simply listed as an unaccredited band.  However, this recording is early enough that it features an opening announcement  – and note that the announcement credits it as “Columbia Band” even on the Standard issue.   Such opening announcements were a holdover from cylinder records where the lack of surface space for label and credits made them necessary.    In 1904 cylinders still had a larger share of the record market than discs.

“Yankee Patrol” was composed by Frank W. Meacham who is best remembered for his 1885 composition “American Patrol” which, decades later, was revived in a memorable 1941  Glenn Miller recording.