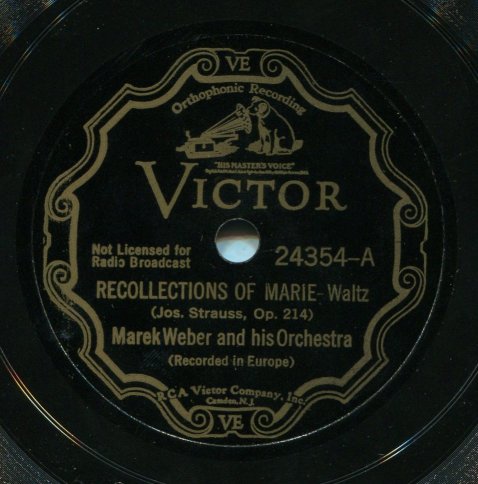 Here are a couple of waltzes performed by Marek Weber’s orchestra.  The orchestra performed everything from the classics to popular music and jazz and achieved international fame through its recordings.   For many years it was a regular feature at Berlin’s top notch Hotel Adlon.  Weber was one of many Jewish performers who were banned from performing and had to flee Germany when the National Socialists came to power in 1933.

“Recollections Of Marie” (“Marien-Klänge“) was composed in 1867 by Josef Strauss and was dedicated to Marie, Princess of Liechtenstein (1835-1905) who was the patron of the ball at which it was first performed.

My copy is an American pressing on Victor.  Both sides were recorded in Germany in 1930 but did not make their way into the Victor catalog until 1933.