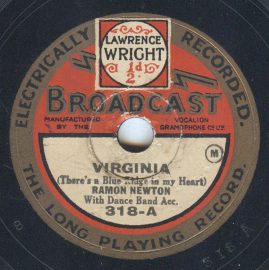 Cyril Ramon Newton was a British vocalist, violinist and bandleader.   He is probably best remembered for his vocals on recordings by the Savoy Havana Band.   He also performed with the Savoy Orpheans and briefly led the band after the departure of its founder Debroy Somers.

Now credit is given for the band that accompanies Newton.  But a good guess is that it was likely directed by Henry Bidgood who led the Broadcast label’s in-house band.